In the following analysis, I will look at how the two favourites of the Tour de France are perceived on Twitter. For those of you who do not follow road cycling, Tour de France is a road racing stage race containing 21 grueling stages, and it is considered the largest cycling race in the world.

According to the bookmakers, the pre-race favorites are:

Now, let’s have a look at how the two of them are perceived on Twitter.

We will use the “rtweets” package to access all available tweets concerning the two riders. If you wish to replicate the analysis, please note that you need to authenticate your Twitter-oath before downloading the data.

First, we specify the search words and collect the data in a data-frame. Note that Twitter only keeps data for up to 10 days, so I save the data as a .rds file in order to be able to replicate the analysis in the future.

We can start by looking at the number of tweets per day. 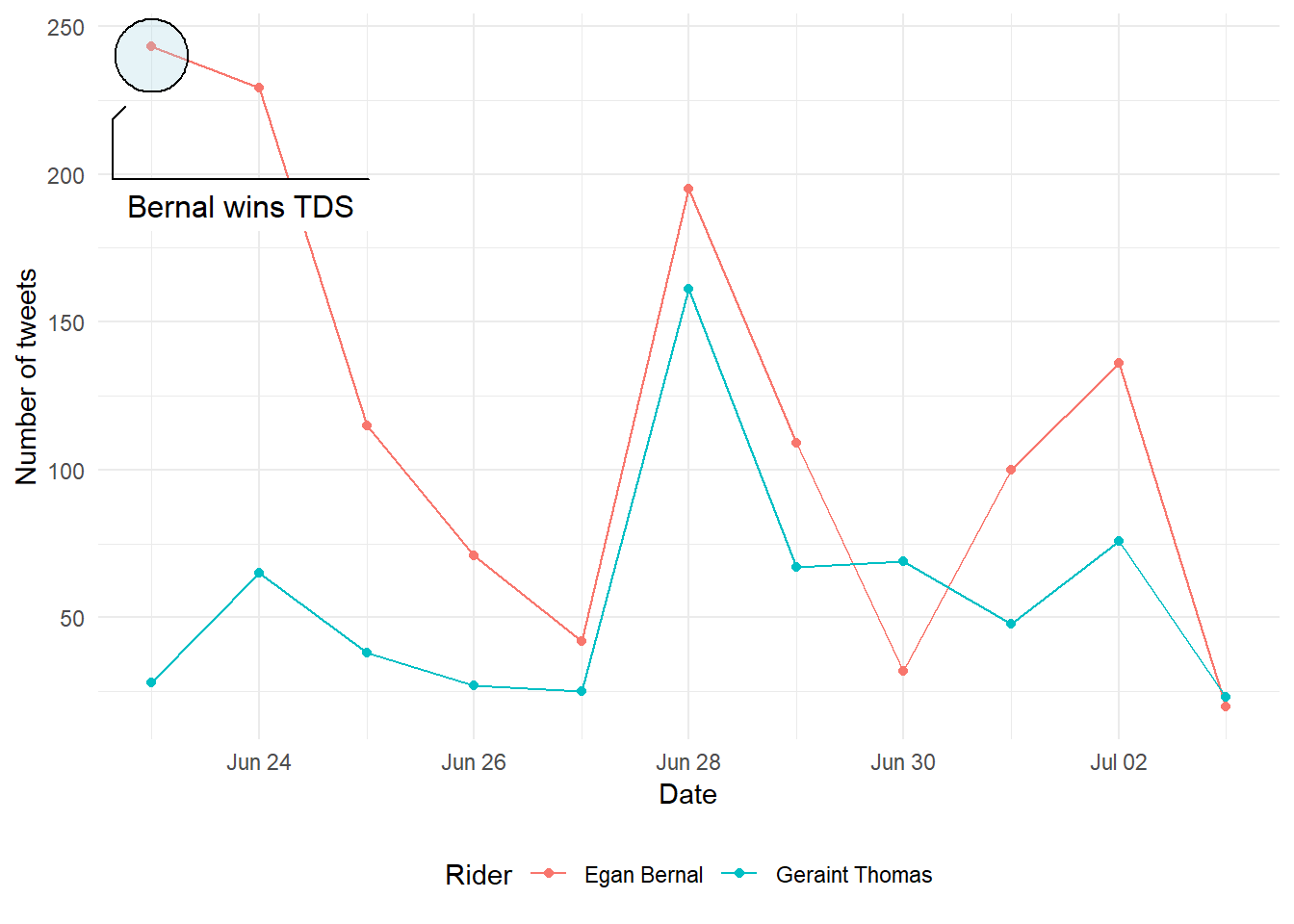 As one would expect, Egan Bernal was far more talked about towards the end of June, since he won the Tour de Suisse in this period. However, he’s also been slightly more popular on Twitter in the last couple of days - but the difference appears minimal.

First, we will look at how the tweets of each rider can be mapped to different emotions such as anger, happiness and anticipation. This is done by using the “nrc”-database available through the excellent package Tidytext. 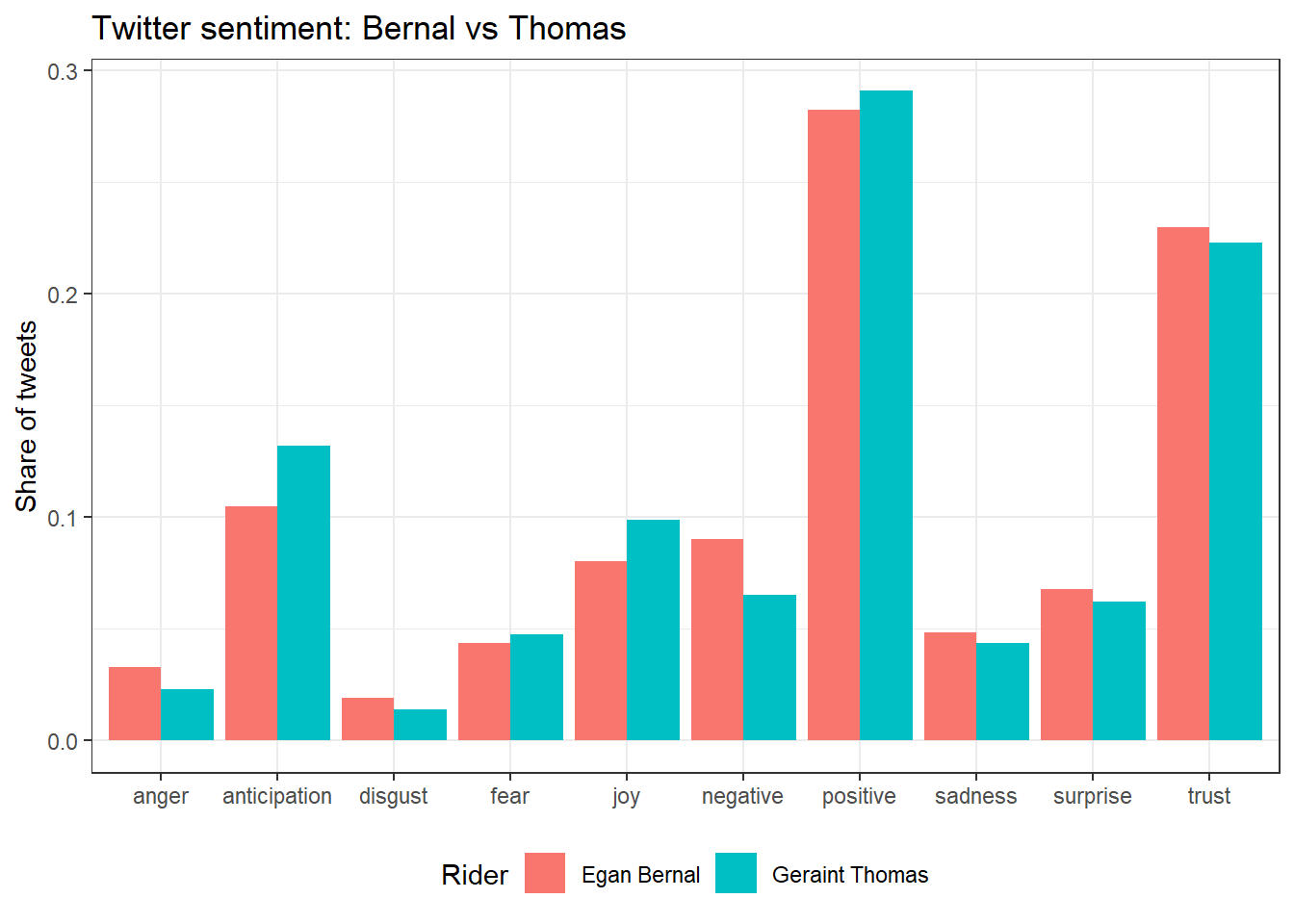 There are some small differences, such as the degree of “anticipation” being higher for Geraint Thomas, but the results hardly look statistically significant

However, the data set is probably too small to detect differences over so many possible emotions. Therefore, we can focus exclusively on classifying positive/negative emotions. For this simplification, we can use the “bing”-database.

Next, we can look at how these emotions have evolved over time. 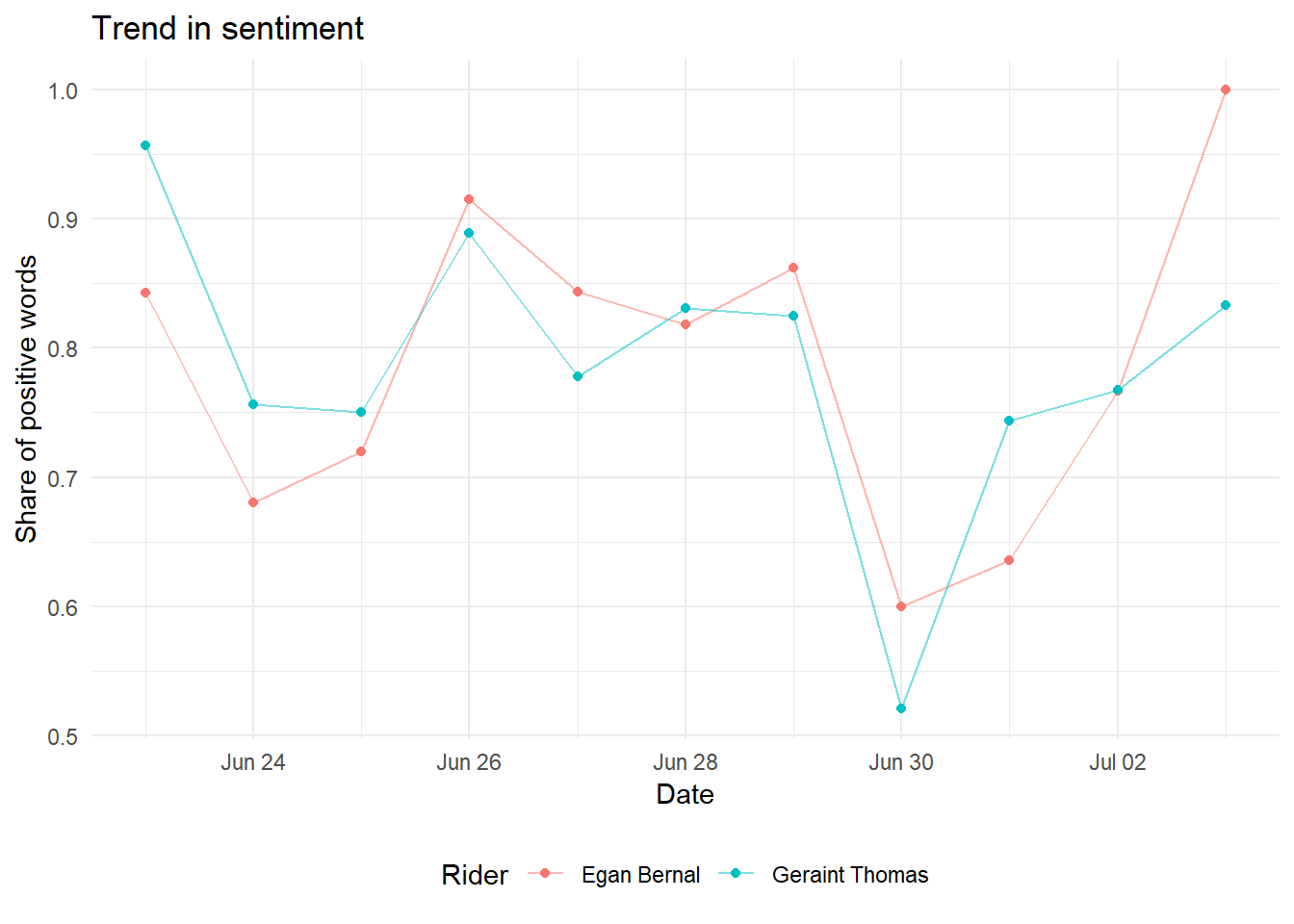 Again, there really aren’t any signs that one rider is more popular than the other.

Finally, I will create word clouds to investigate the most common words used in tweets concerning each rider. First, we can look at the word cloud for Egan Bernal. 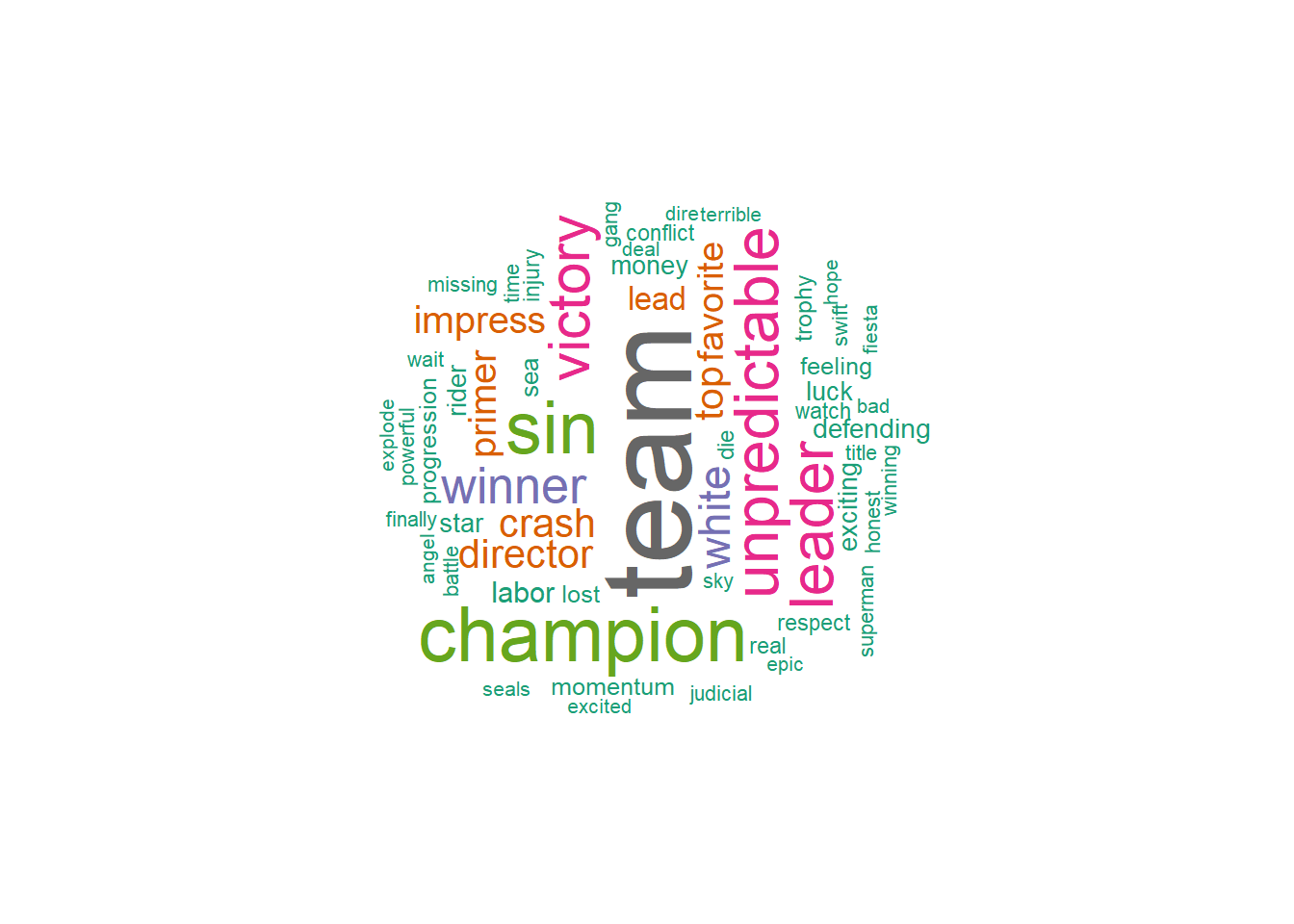 As we can see, the most prominent words are positively loaded words such as “team”, “champion”, “victory” and “winner”. Note that these words are heavily affected by the abundant amount of tweets on the day of his Tour de Suisse-victory. In addition, it seems like many people agree that he is quite unpredictable - which is often a prominent trait among younger riders.

Here is the corresponding plot for Geraint Thomas: 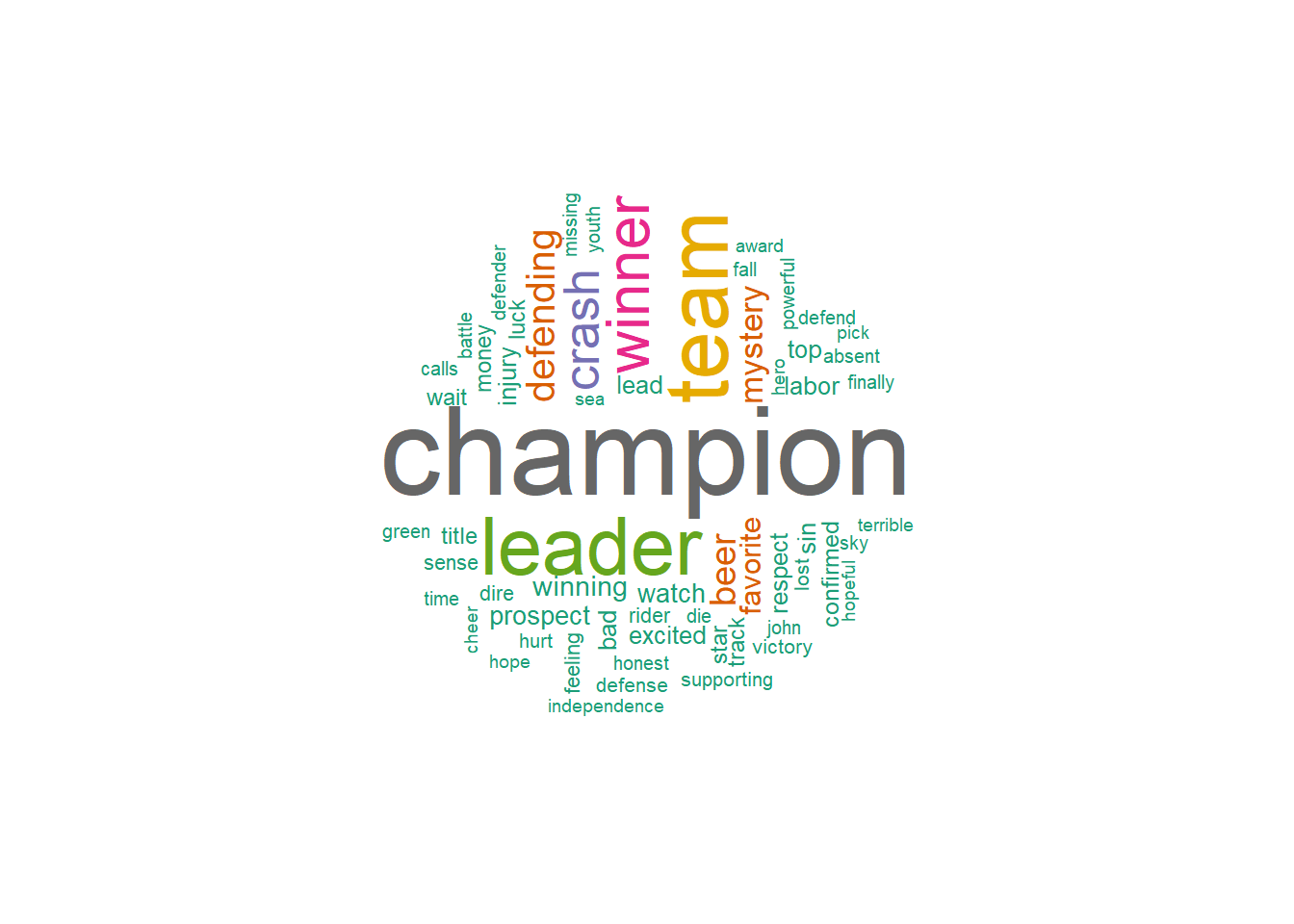 Obviously, this is not a very scientific exercise and one cannot expect to get a lot of insight from analyzing Twitter-data (it’s fun, though). There are lots of issues with this approach, such as: